The London International Awards (LIA) has once again partnered up with adobo magazine to give two young creatives from the Philippines the opportunity to attend the 2019 Creative LIAisons.

The partnership, on its sixth year, is once again holding the adobo LIA Young Creative Competition, this time calling for entries to promote reading books as a means to boost the value of creativity. Philippine-based creatives aged between 21-30 years old were given approximately a week to think up of what they wanted to submit as open call started on July 21, 2019. Entrants must be working in ad agencies that are members of the 4As of the Philippines or IMMAP.

On July 22, 2019, the night of the deadline, there was an outpour of submissions amounting to 169 entries across 127 individuals and 28 ad agencies. All of the entries showcased different approaches to the mission of encouraging creatives to read more, adhering to this year’s theme, Reading Books Opens Your Mind. The theme was built on the idea that the act of reading books as opposed to keeping eyes glued to multiple screens can help a person not only enter a state of relaxation, but improve critical and creative thinking as well.

Michelle Ann Lawas Edu, an Associate Creative Director from BBDO Guerrero, won the top spot in this year’s adobo LIA Young Creative Competition with her entry entitled Font Book. Her entry consists of a collection of font typefaces that will double as a library of synopses of famous literary pieces; her way of combining two things that creatives always encounter — fonts and placeholder text. The idea is to replace conventional placeholder text with stories, and get them intrigued enough to start reading.

“Upon download and installation, the font file is bundled with a digital copy of the piece it’s paired up with. This way, advertising professionals can be introduced to new books while doing the one thing they spend so much time on,” Edu wrote in her concept board.

Nudebooks by Reuben James Fermin, an Art Director from Black Pencil Manila, on the other hand, bagged the second spot with a video that showcased his idea of stripping books of their titles and front covers, and with that, the reader’s tendency to judge a book by its cover. He suggests building a library of new stories that advertising professionals can create titles and covers for, turning the campaign into a competition where their final output can be the official name and cover of the book.

The 169 entries all had to go through a panel of creative heads and executives hailing from different distinguished agencies in the Philippines. The panel convened on July 24, 2019 at the adobo Creative Hub, and was headed by adobo LIA Young Creative Competition 2019 Jury President Teeny Gonzales, the Chief Executive Officer and Founder of Seven A.D. 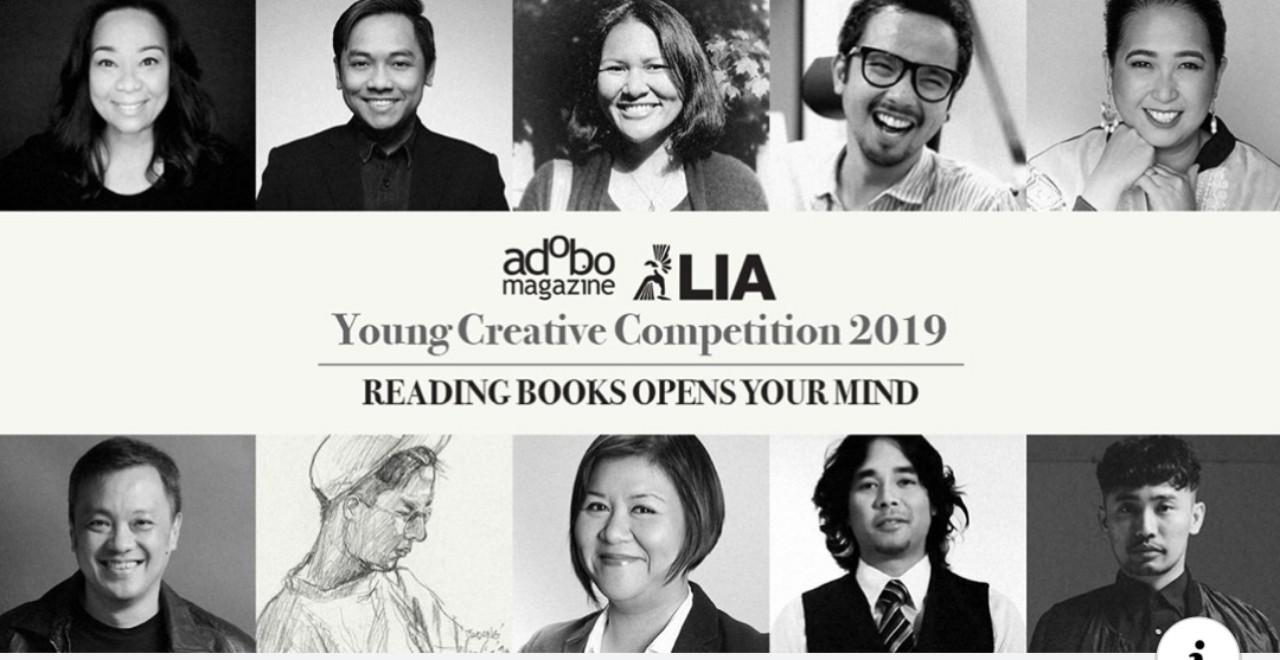 Joining her as panel members were the following: 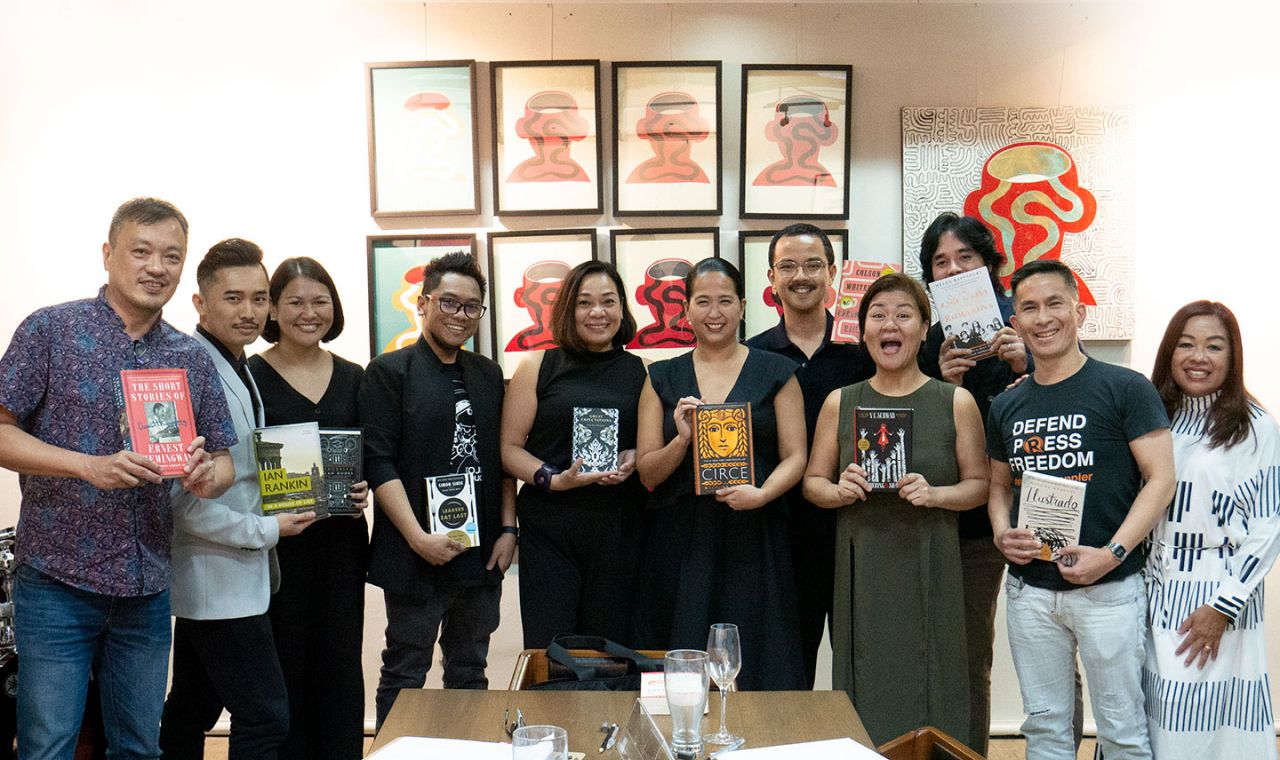 Since the competition called for young creatives to provide solutions their peers will appreciate, some of the entries fiddled with making use of social media and mobile apps —a testament to the generation’s desire to keep a flourishing and active online presence. Other formats presented include the classic poster, various employment benefits, and partnerships with bookstores to name a few.

While deciding on the winning works, the jury brought up the topic of prioritization. For a competition such as this, should they focus on the insight or the design? It all depends on the jury’s prime concern which was why the discussion was rich when it all came down to voting.

When asked about the experience of judging at the adobo LIA Young Creative Competition 2019, Jury President Gonzales shares: “We had an invigorating and impassioned discussion in the judging yesterday for the Young LIA winners. Which was not a surprise since the subject of reading was close to most of the juror’s hearts. In the end, the winners chosen stood out in terms of the insight on the desired target audience as well as creativity and crafting. Quite a feat given the number of entries as well as the diverse set of jurors. So, well done.“

It was a tough call to make for the jury. They came back to the shortlisted entries again and again to make sure they were making the right decision in choosing the winners, and after three rounds of deliberation, the jury was finally able to make a decision.

As winners of the competition, Edu and Fermin will be flown to Las Vegas to take part in the 2019 Creative LIAisons hosted by the London International Awards. The duo will be given the opportunity to sit in a jury room to observe statue deliberations, attend workshops conducted by industry leaders, as well as various networking opportunities with jurors, speakers, and other experts in a relaxed social setting. 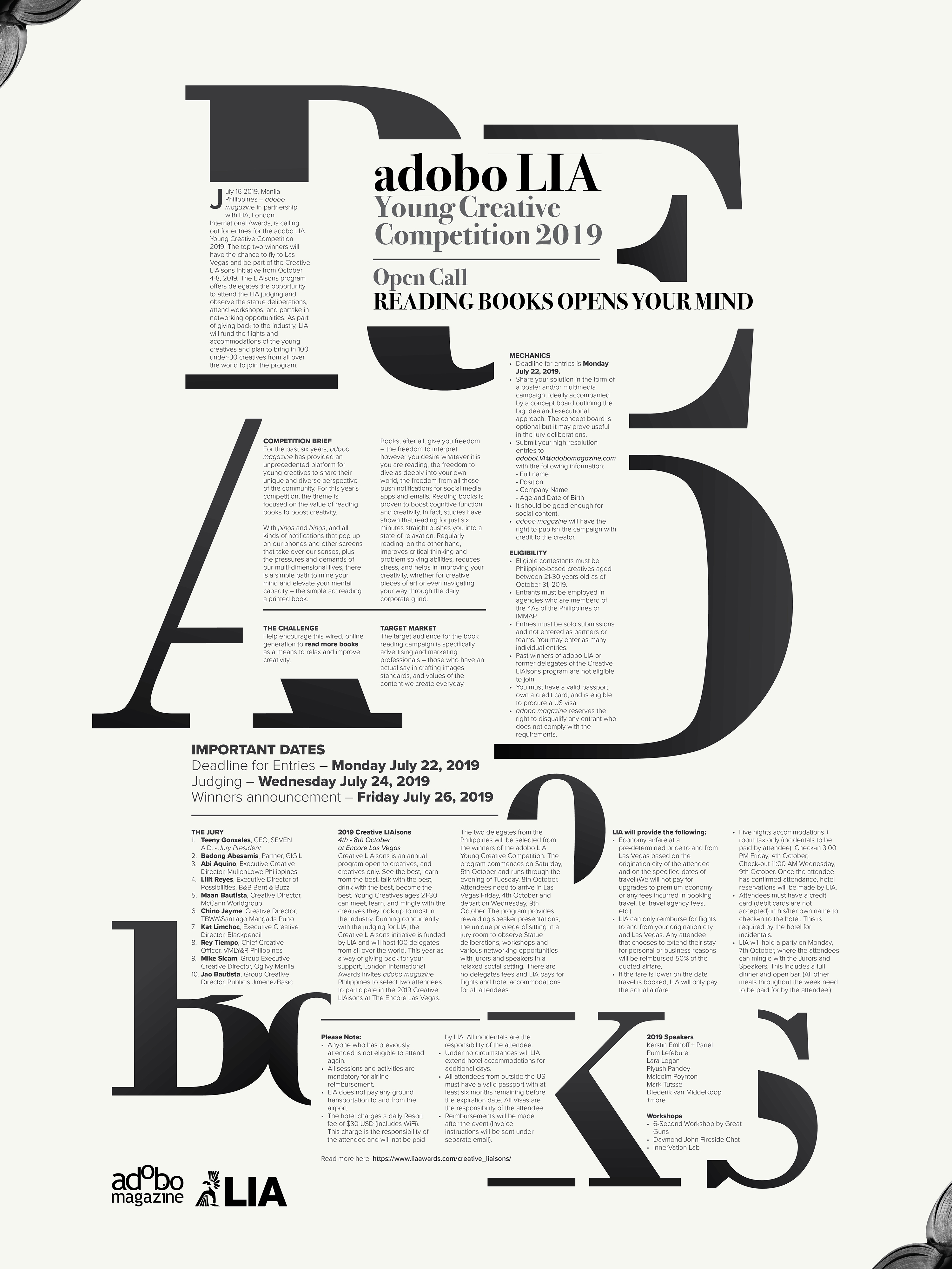